The Law Hawks tipping competition is back and ready for entry!  Email Andrew Denton at denton@vicbar.com.au for details.

The Law Hawks are making their inaugural trip to Tasmania for the Round 4 clash with St Kilda on 16 April 2016.

We have been exclusively offered the ultimate match-day experience, which includes:
Cost = $400 per head.

Hawks make it a Threepeat!

The Hawks can do no wrong!  Taking out the Premiership over the Eagles, seemingly with ease, the Hawks made history with a Threepeat!  Cyril Rioli was magic, as usual, and was rightfully awarded the Norm Smith Medal to rapturous applause, while this years GF darling was none other than Ryan Schoenmakers, who put in a career best performance.  Congratulations again to our great Club!  Go Hawks!!

The Law Hawks tipping competition for the 2015 is now open!  Email Rebecca Denton at rebecca@nmdlawyers.com.au for details.

Hawks win back to back Premierships

The Mighty Hawks have done it again, securing their second Premiership flag in as many years, with a thrilling 137-74 victory over the Sydney Swans. What a win, what a season, what a team!  Congratulations to all involved - we at the Law Hawks are as proud as ever to support this great Club.  Go Hawks!

Law Hawks in the Press 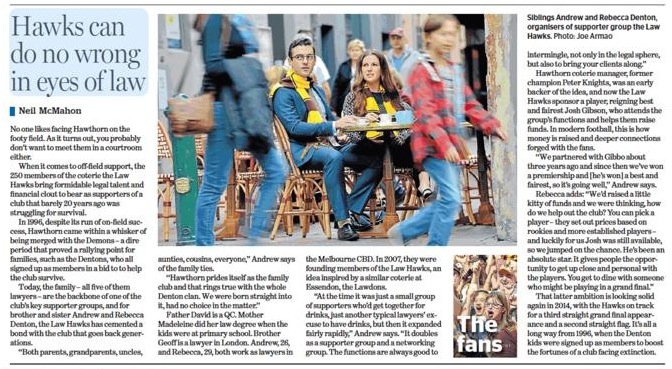 Click here for an electronic version of the article.

Hawthorn have saluted for the 11th time, beating Fremantle to win the premiership.  Hawthorn were the best team all year, and capped off a magnificent year by winning the Grand Final in front of more than 100,000 people.
Congratulations to the players and coaching staff and we look forward to celebrating all the way through to the start of the 2014 season!

The Law Hawks very own Josh Gibson has won the Peter Crimmins medal for 2013!  The Law Hawks are proud to be associated with Gibbo and congratulate him on his massive achievement.  Well done Gibbo, thoroughly deserved!
Powered by