The Law Hawks are thrilled to continue our sponsorship of Gibbo and wish him well for Season 2017.

Gibbo gets a goal! 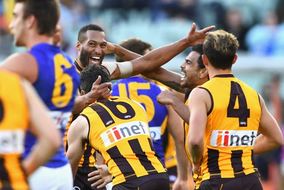 The Law Hawks were thrilled to watch Gibbo finally nab his first ever goal for the Hawks in the Round 2 clash against the Eagles - not to mention his epic effort of a career best 44 disposals during the game.

Well done Gibbo!  You are a true superstar!

Congratulations once again to the Law Hawks own Josh Gibson, who has taken out the Peter Crimmins Medal for a second time, in 2015.

We are proud to continue our sponsorship of Josh for Season 2016.

A huge congratulations to Gibbo who has won his first Peter Crimmins medal.  Josh was awarded the medal for his consistent and dominant performance for the 2013 season in the brown & gold.  It's his first best and fairest award, and we couldn't be happier for him.

Well done Gibbo!  What a season!

Read more about it here.

Gibbo named in 2013 All Australian Squad

A huge congratulations to the Law Hawks very own Josh Gibson for making the squad for the All Australian team.  It is the first time Josh has been included in the squad and it is thoroughly deserved.  From all the Law Hawks, well done Josh and good luck for the finals series.
Read all about it here

For the past two seasons the Law Hawks have been the official sponsor of star defender Josh “Gibbo” Gibson.

Through this sponsorship we have great access to Josh, who attends and hosts all of our functions, and provides personalised memorabilia exclusively for the Law Hawks.

Click below to learn more about the Law Hawks very own Gibbo, La Gib, Joshua, The Iron Fist, Josh Gibson.
Powered by